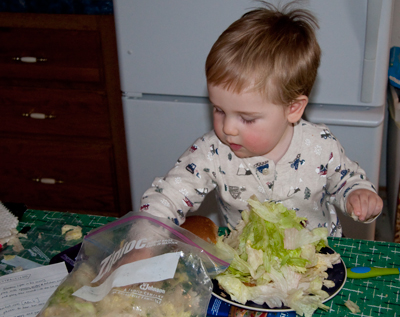 Arden puts the green on Mom's chicken sandwich. Yes there is chicken under there.

Hello again, thanks for visiting!  It’s been at once a busy and very uneventful week.  Arden’s continuing his vertical exploration and it seems that there is nothing safe left in the house.  He’s pretty respectful and very careful so I’m not worried.  We don’t really have anything of value in most of the house anyhow, though it would be nice to lose as little as possible.  But, again, he’s incredibly respectful of our things and hasn’t broken anything thus far.

His favorite place to climb recently has been to the top of Mount TupperwareTote.  We’ve got one of those big tote tub things that apparently makes the perfect stool.  He’ll drag it all over the place (usually just the kitchen), push it against the cupboards and help arijem with her work.  He’s not afraid to tackle any of the household chores, be it cooking, mixing, washing or quality assurance.  I think QA is his most favorite, must take after Dad there.  He’s very good at taking instruction for a 16-month old, and will maintain a high amount of focus.  I think the gMa’s side tongue focuser has made it to Arden as well, anything he’s up to that requires any amount of focus will be done with a tongue in clenched teeth.  It’s funny to see that reflection of myself, gMa and gMa’s family in him.

We visited Uncle Sean in the hospital this week, he had a herniated disk trimmed.  Arden was a very good visitor, ran back and forth with our get-well cards and the tin of cookies arijem put together, even finished his job before he was distracted by a get-well balloon.  He managed to stay in the recovery room for the most part, although gMa did escort him through the magic doors (elevator) to the water machine a couple of times, and I think that sated his thirst for exploration.  It also helped that there was so much to explore within those walls.  They had a bed that came out of the wall, Uncle ‘Hat’s bed had buttons that made it do funny things, there were lights in all sorts of places.  It really was a young explorer’s dream.

The highlight of the evening had to be when Arden was exploring a light fixture that happened to be below the automatic hand sanitizer dispenser.  Reports vary whether it was Arden’s head or the balloon in tow that triggered it, but the end result was unanimously verified.  A noise sounded from overhead and wet splattered on the floor.  Arden wasn’t so much scared as he was deeply interested in what made that noise and that puddle and how he could trigger the neat thing again.

Arden has been a very good traveler lately.  We’ve taken several walks around the blocks and he’s been loving his stroller.  He’s ridden in the car very nicely, when he wants to.  We were very impressed on the night we went to visit Sean that he didn’t conk out on the 30-ish minute trip.  Once we got halfway we had to coax him just a little bit so he wouldn’t get the cat nap trick and feel refreshed and unwilling to sleep.  On that note, yes, he’s been sleeping mostly through the night most of the nights.  We’re happy for that, although Mom has been dozing off with him a good share of nights, since she is sleeping for two.  Speaking of which, she asked me to wake her up 10 minutes ago, better go get in trouble.  😀

Thanks again for reading, until next week, 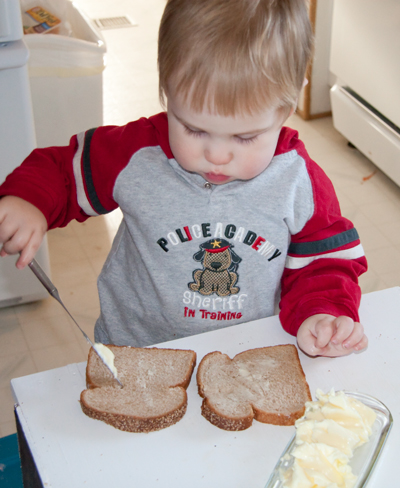 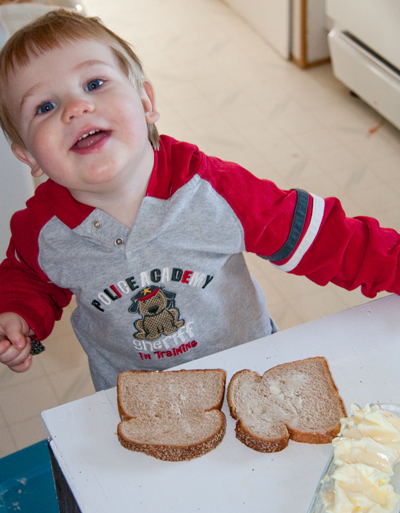