Arden Weekly – “So Somebody Does Read It” Edition 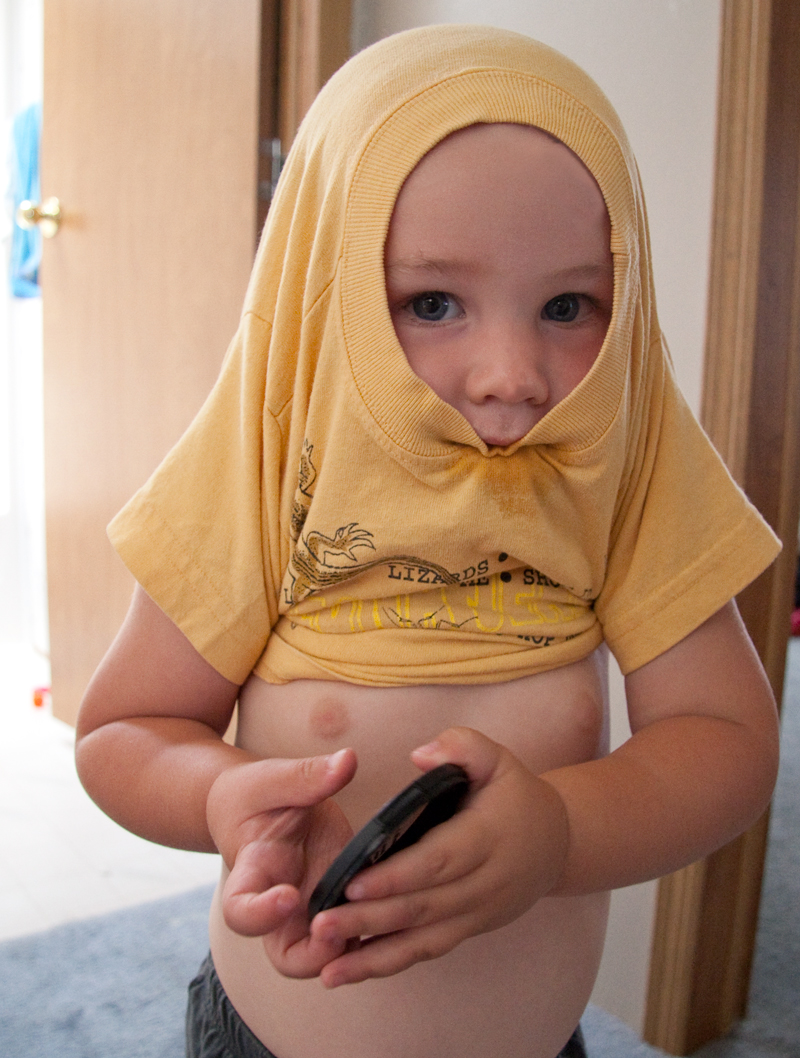 Okay, I think it’s almost been long enough.  About the title: I’ve been having a bit of a “why am I writing this every week when only AJ and my parents read it” moment, but I’ve since heard from enough people to get me motivated to write again.  I apologize to those of you who missed reading it, especially those of you who had commented in the past.  I will say this, though.  It’s nice to see comments or feedback.  Not prodding you to write “lulz I readed it” every time something graces this hyperweb portal, just every once in a while if you’d just check in, I’d really appreciate it and will find it even easier to sit down and spend the time editing photos and writing the next week.  Much love; rant off.

Our guy has been on a serious reading frenzy lately and it’s really been showing up in the growth of his vocabulary.  I’ll hit my favorite phrases below, but you really should come see them in person!  😀  Starting off will be how he shows off a new achievement.  He’ll gaze into my eyes or run over to my feet and call “Daddy Ook Ook”  or is it “oouk oouk”…at any rate, it’s “look look” and it’s unbelievably adorable.  If you’re lucky he might substitute my name for yours, but good luck.  He’s been my shadow lately.  There have been several nights that he has insisted that I help get him to sleep, but I only end up distracting him so far, so I end up having to leave, which breaks my heart more than his.

The next anecdote will center around his ever growing strong will.  He’s usually pretty mild about it, but there are times where he’s undoubtedly a toddler.  The best way to trigger it is usually to offer him the choice between a few books or snacks or something.  He’ll look at the one, then the other, then the one and finally pull out that judging index finger and proclaim, “DeeS on!! (this one)” 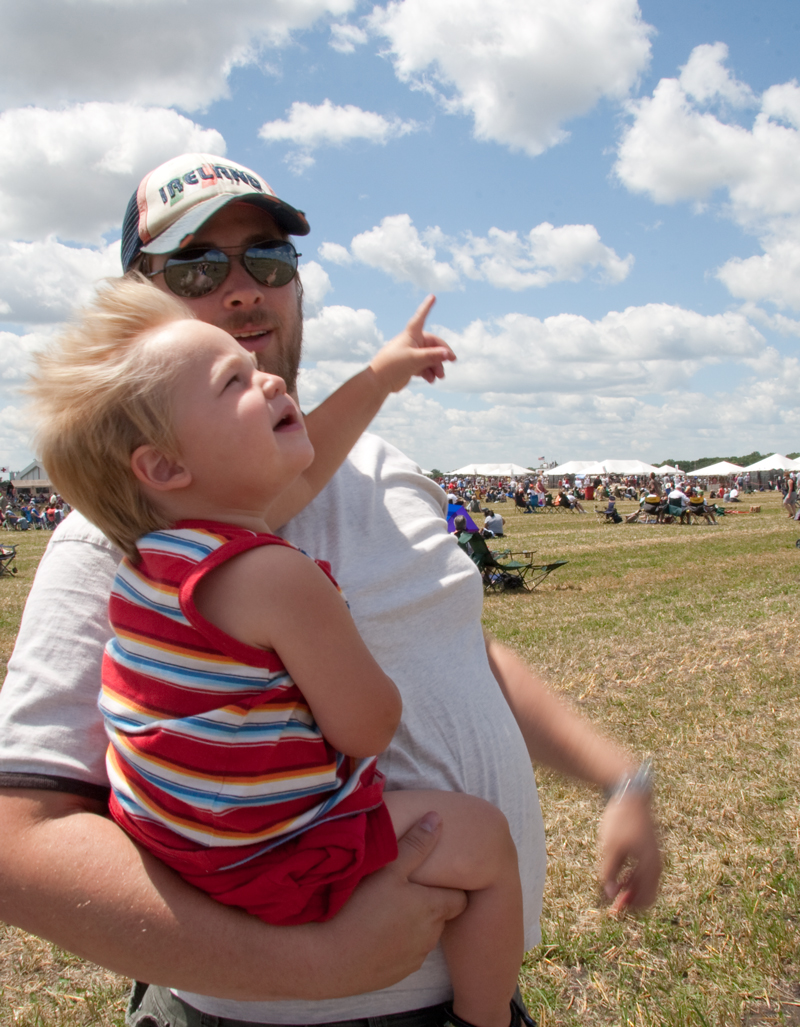 We went to the SF Airshow this past weekend.  I think we all had a great time, I know I did.  There’s always been a special place in my heart for aerobatics, well, flight in general.  And to be able to go with my wonderful son and watch him catch the bug and just soak everything in.  It did end up taking its toll on him though, he just barely made it back to the car before zonking out for  a nice well-deserved nap.  He’s getting to be almost conversational with some of his speech too.  The airshow is a prime examlpe of it.  While sometimes you’ll just hear, “Planes, noisy, people, umbrella”, other times you’ll experience him tell you how the planes flew all around (follow that pointer finger again) and hear how noisy he thought it really was at some times.  He’ll cover his ears, shake his head and torsos back and forth and scream, “NooOiIIIISEEEEEY”.  He might then go on to tell you how many people there were, this by pointing like he was picking them out of an imagined crowd.  Now, you might ask about where the umbrella story comes in.  This highlights his rapier memory.  On our way in we followed a little girl with a pink and purple umbrella.  As we were heading out Arden glanced over and saw that same umbrella.  It didn’t take him long to point her out, he’s just quick.  I think he remembered that we followed her in before I did.

The other verbal utterance that is a lot of fun, but quite dangerous is “Vroom VROOM”  This, of course means it’s his way of telling us it’s his turn to drive.  Though sometimes it’s, “Daddy Vroom” or “Mommy Vroom” but most commonly, “Arden Vroom VROOM!”  He’s a lot of fun to see in the driver’s seat, he handles it very well.  Always turns pretty vigorously, always beeps and usually even puts the key in the ignition and touches the shifter.  He’s amazingly observing!  We tried to get him to some of the airplanes to Vroom them, but the lines were quite horrible, but luckily there were some reps from the Guard there with a MLRS and HMMT there.  The cool  thing about having those around is that they’re machines that both my Dad and I have worked on the communication systems for, and to get Arden up in one…well that’s just cool.

Until next time, which will hopefully be next week, 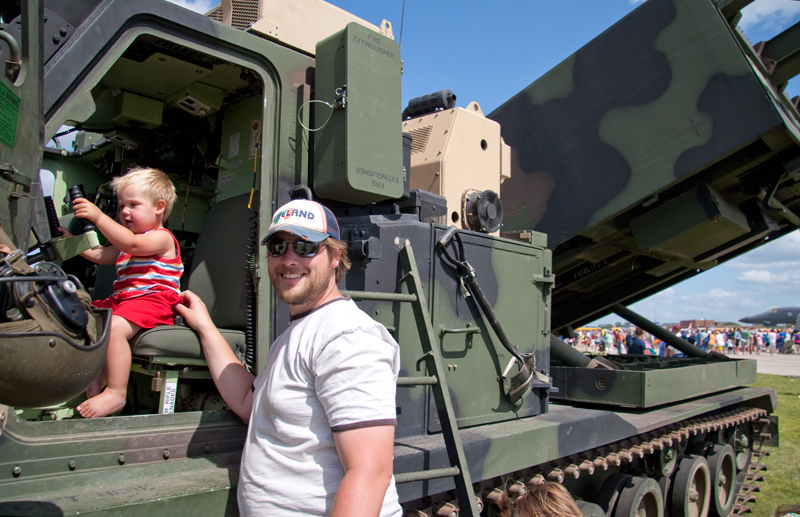 I show Arden around the MLRS (Multiple Launch Rocket System) 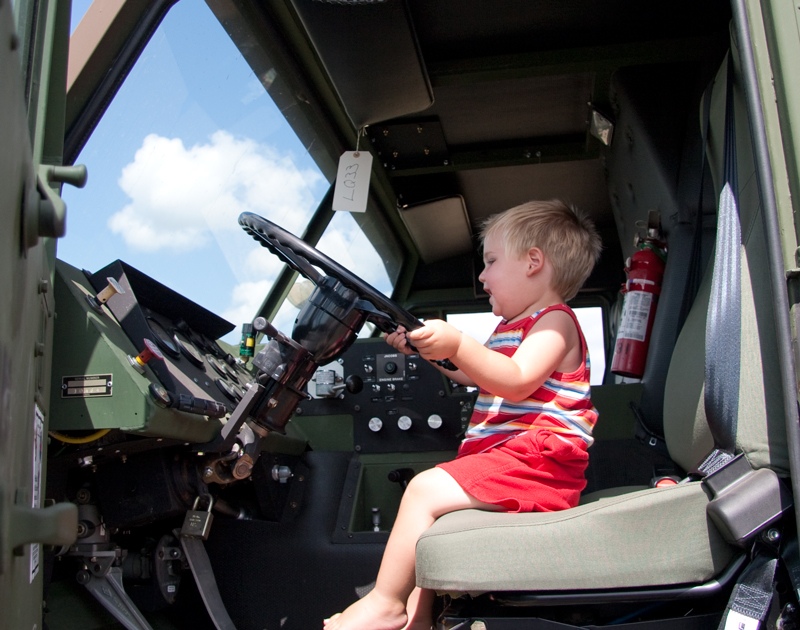