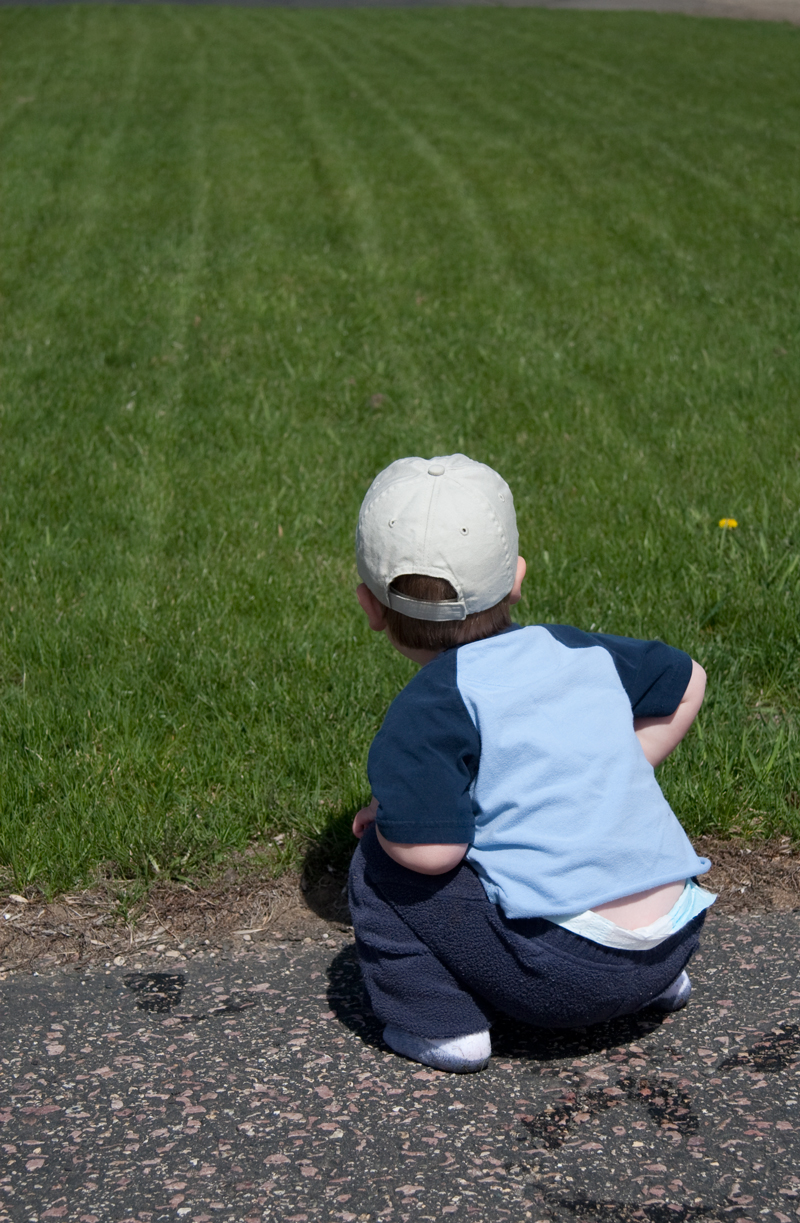 What a busy week!!!  Arden finally got those bottom two molars in.  Well, one looks to be about 75% through, the other is all there, just needs to biggify.  To distract us from the teeth-athon, there have fortunately been tons of things to do.  Outside is by far the favorite of the week, though.  As you can see from the first photo his little socks were soaking wet.  Well…maybe this will explain things best, and save me a thousand words: 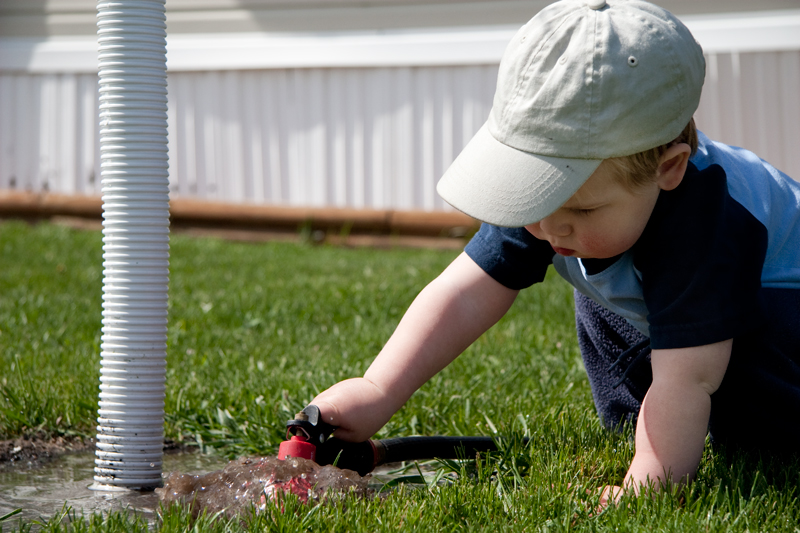 Arden’s been a huge helper outside.  There is very little he can’t or won’t do any more.  ::sniff:: ::sniff:: he’s getting so big.  Here he’s watering one of Mom‘s maples.  On the other side of the house is the patch of lawn he seeded (no fertilizer, natch) and the 10 trees he helped plant.  Over his right shoulder is the rock garden he’s been thinning out.  Well, that one’s not quite so helpful, but he does it with such sweetness that we call it helping.

Words are coming faster and faster and FASTER lately.  It’s crazy.  I swear he learns at least 3 new words from me each day (hopefully none of my I-don’t-think-Arden-is-around words slip in there), and I only have a handful of time with him each day.  I know he’s learning most from his much sweeter mother.  I can’t even count the new words, but the phrases are great.  Here’s my favorite story of the week.  We’ve been giving Arden a slice of chunk cheese with breakfast on many mornings, but we’ll slice it into thirds if not quarters so he has a nice, manageable stick to chew on.  One day he stopped eating them almost outright.  I think he had noticed me eating a full slice not too much earlier, maybe the previous day.  Anyhow, this day he just refused the sliced-up pieces with a big, “NO!…Daddy.”  AJ didn’t really know what to think of it, but he continued, “Big!  Daddy-big!”.  From that point on he only takes slices that are as big as Daddy eats.  It’s very sweet, and warms my heart to have a guy so amazing look up to someone like me.

Today was Mother’s Day and we had a great time with our beloved Mommy.  We started off with some breakfast preparation, complete with “Daddy-big” cheese slices, and juice with ice, which has become equally important to Arden lately, I know he gets that from Mom.  After breakfast we headed to Church and took Mom out for lunch.  Arden snuggled up for a nice after-lunch snack with her pretty much all afternoon, but woke up just in time to get Mom some flowers and assemble things for a nice grilled-out supper.  We made her some steak and shrimp (yes, her request) and were delighted to find out that Arden LOVES shrimp.  I was a bit concerned that he had inherited my unease about seafood, but he just inhaled his pieces.  After supper was probably the most fun new thing we’ve done lately.  We went on a bike ride!  One of mom’s gifts was a bike-mounted baby seat.  This one is actually pretty clever.  The child sits in front of you, closer to your center of balance and where you can snuggle a bit better to make the bumps fun instead of scary.  It’s a tiny bit uncomfortable to me on her bike, but I think as Tiny2 gets a little bit bigger we might be moving it to mine where it will fit me better.  So far AJ seems to like it quite a bit.

It’s sort of hard to see from the distance here, but there’s a little hand/head rest in front that seems to work very well for a drool pad, as tonight proved.  Arden’s pretty snugly secured in a 5-point harness and has foot cups to ward off any flying debris and make sure toes don’t get spoked.  It’s really quite nice.  He got a helmet too, but we were just making a quick run to make sure the seat actually allowed pedaling.  I’m not really that bad of a Dad.  (I hope)

I do know that I’m half the parent Arijem is, she’s an amazing woman and an incredible mother.  I’m so proud to be in the position to thank her for all she’s done for my beloved son and me.  AJ, I appreciate you, and love you dearly.

Mom, you too have forever been an incredibly positive influence on my life, and I firmly believe that without your guidance and encouragement all I have now would not be possible.  I love you very much too, and appreciate you more than I’ll ever be able to express.

You two are the best.  I hope to live up to your example of parenting, but think I have a pretty decent shot…after all, I do come from a long line of parents.  😀

Well, we’ve gotta get back to work.  Until next time, Dad.