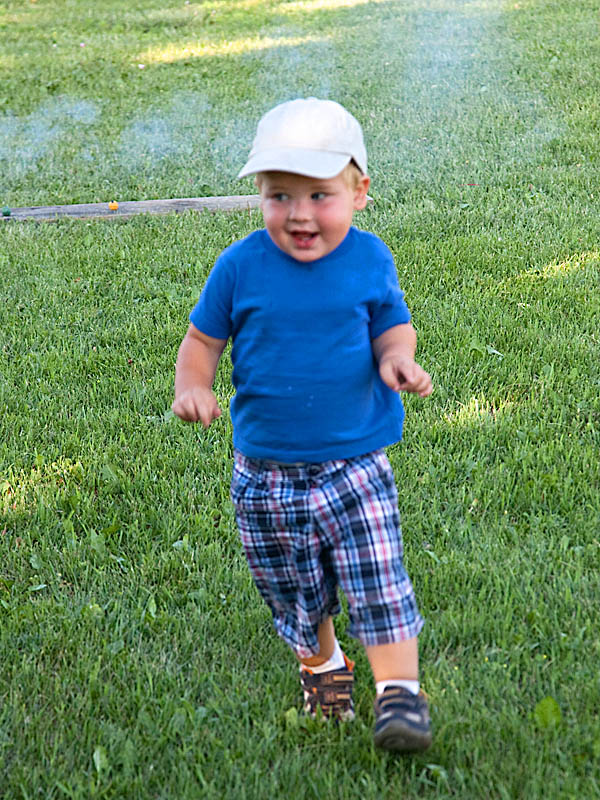 Arden running away from a freshly-lit smoke ball. He really had a blast with the fireworks, wasn't a huge fan of the surprising noise, but seemed to love the lights and flashes.

Arden has been even more fun this week than he was last.  The weather has been nice enough for us to get outside and be silly some, but we’ve still been doing our share of wrestling and goofing off.  I’ve been getting a little more concerned with involving education(al activities) in our play.  It’s wonderful how quickly he’s been putting things together.  One of the most recent educational forays has been into getting some more parts of the body named.  He had been very good with the common stuff, mouth, ears, eyes, nose, so I started gently pushing.  After only a few minutes he had learned elbow (though eyebrow may replace it from time to time), fingers, toes, knee, foot, ankle, forehead, neck, chest and, of course, butt.  After all, you’re not really a boy unless you can run around in public screaming, “Butt butt butt!”

This guy…oh boy.  He’s going through a car nut phase.  Every chance he gets to be in or around a car is just pure elation.  He’s so clever with it too.  He was running gMa’s CD Player, he can put the key into our car’s ignition, and knows which switch belongs to the which windows, and which is the door lock.  It’s crazy.  Sometimes his Daddy lets him “drive” the car in the driveway.  It can be a bit of a double-edged sword though.  Sometimes when we need to go somewhere and he’s tired out, or not, he’s much more interested in driving the car and monkeying around up front than he is in sitting in his car seat.  Props to gMa for suggesting we actually use the toy steering wheel Aunt Nikki got us for his 1st in the car instead of in his room.  That has helped quite a bit, but as I was saying last week, he’s quite a strong-willed little tot.

The time is starting to come to get Arden used to the idea of having a baby [probably] brother around the house.  We’ve been taking care to point out babies we see when we’re out and about, and letting him talk to the baby in Mommy’s tummy a little bit.  We had him feel kicks one day, but I think that spooked him more than anything.  He jumped back pretty quickly and hasn’t been showing any interest in feeling any more recently.  I think @arijem is still planning on getting a doll to carry around when we get closer, just to get some practice in.  So far, I think we need practice.  We were in Target last week, poking around a little bit and came across the doll section (Why, by the way are all dolls girls?!?).  The particular model we were checking out had a sensor that made it giggle when the doll was moved.  Of course, our little guy found out pretty quickly that the easiest way to make a baby giggle is to bop it on the forehead, right between the eyes.  Oh dear.

Until next time, may your baby not get bopped, 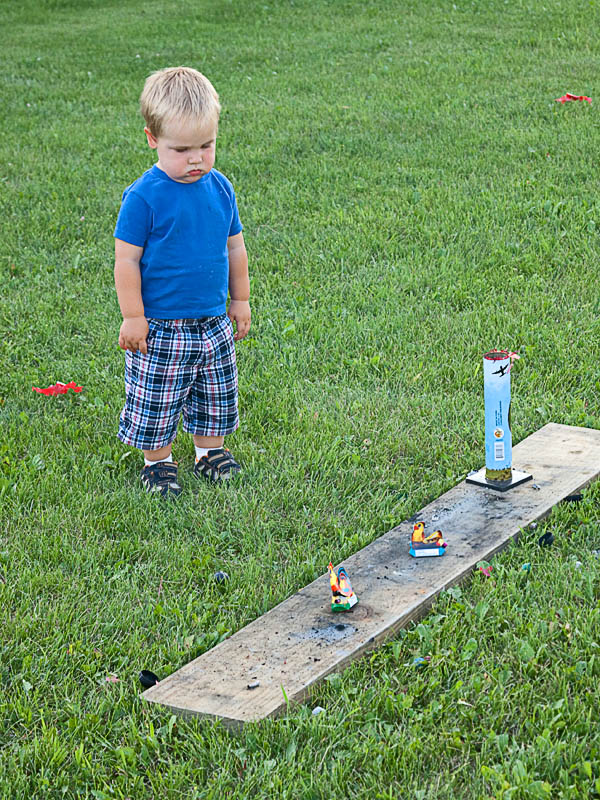 Arden was very upset that the chicken wouldn't go any more. He spent several minutes trying to coax it back into action.

Extra special thanks to gMa for sharing her photos.  I got too busy playing with Arden and chatting to turn my  camera to him.  Silly me.