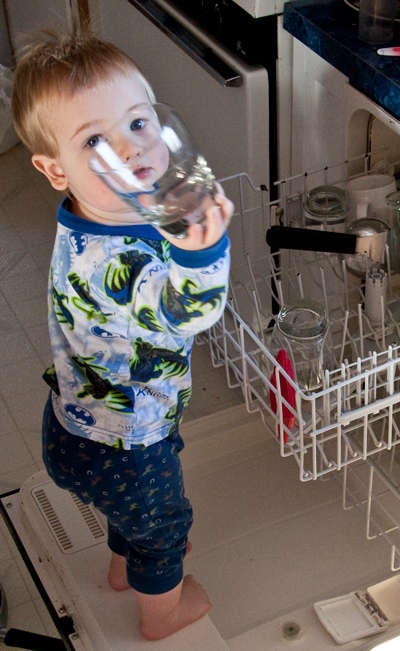 Arden got his hair cut this week!  Actually technically last week, but since our last Arden Weekly.  The photos are from the morning after and I his very expensive stylist has made my his apologies for ruining a beautifully boy-ish head of uncontrollable hair.  I even did a halfway decent job at it…sure there are some screw-ups interesting style choices, but I blame Pooh bear and bribes for not being Pooh-ish and bribe-ish enough.

We had him in his high chair, which was planted in front of the warm, matronly glow of the television where Sebastion Cabot read tales of the Hundred-Acre Wood to our sweet little son.  His tray was filled with all sorts of delicious snacks of wildly varying health value.  Either of those in and of themselves should have kept his one-year-old attention span pretty well rapt, if it wasn’t for the Gigantaur version of Edward Scissorhands flailing about above.  Try as we might we just couldn’t get Arden to sit still enough to do a “good” job above his ears and on the nape of his neck.  The rest of the trim turned out pretty well, but there was only a very marginal chance that he get bleeded with those areas.  He just loves to see what’s going on, I can’t blame him, and I think Tim Gunn will forgive this one sin against fashion.  If not, he can come entertain the boy.  😛

In other news, as the week went on we kept noticing words we had either taken for granted or forgotten Arden could say altogether.  The ammendments to Arden’s vocabulary should include:

This brings the expanse of his vocabulary to 51 words!  Great Job Arden-pie and coach!

I suppose I should explain what’s going on in the photos of the week and then get this baby pressed.  Well, Arden’s been into the climbing phase lately, and has been doing a very good, safe job of it.  He’s only had a few minor spills and maybe one tear-inducing major one.  Maybe a bump and a bruise here or there at the worst.  No blood yet, but he’s a growing boy, he’ll manage to shed enough of that later on.  For now a butt-thump is warning enough.  Back to the story.  Mom was unloading the dish washer Wednesday morning, going back and forth between Arden and glassware, went to grab her next glass only to find it was several inches closer than she was expecting, fast at the end of Arden’s arm.  He had monkeyed himself up on to the open dishwasher door and was perched steadily where you see him in the shots, being a very big helper for his darling Mama.  He was exceptionally careful and had perfect timing.  I know Mom appreciated the help, and I the photo op.

Until next week,
Dad 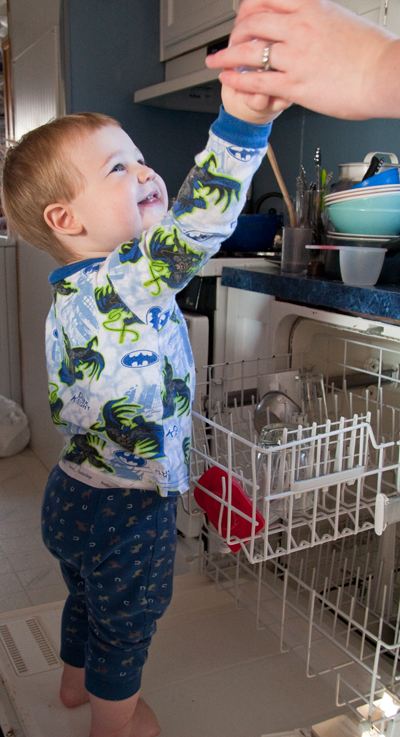