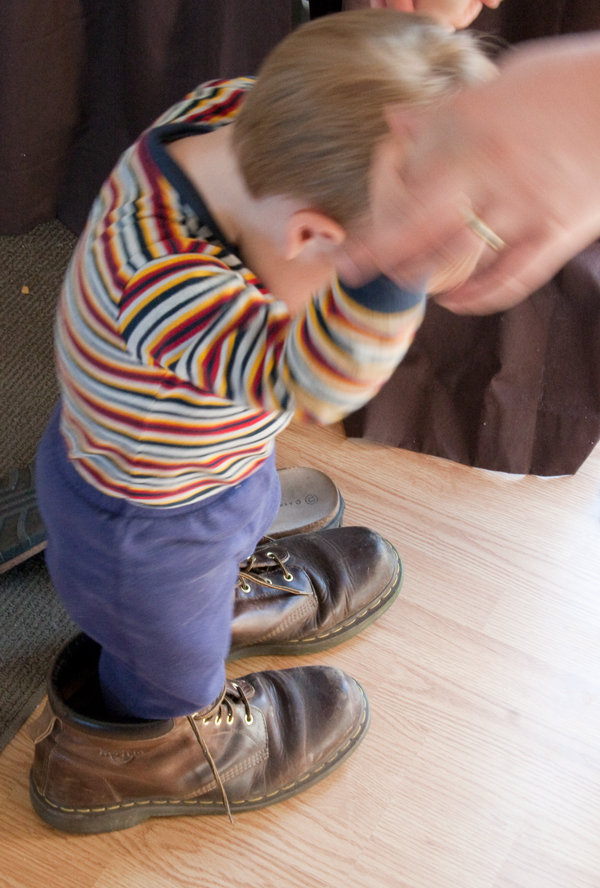 I’m very sorry about missing last week’s Arden Weekly.  We went up North to see Mom-side family and I just got too busy with the rest of the week.  So…what’s new?

You wouldn’t believe it.  He’s been a crazy man these past few weeks.  And a whole lot of fun to boot.  He’s just been amazing us a little more each day.  Take, for instance his emerging aptitude for the spoken word.  Grandma and Grandpa have a game room in the basement with probably the home’s biggest attraction, one of Grandpa’s prize bucks is mounted on the wall.  All the kids have been mysteriously drawn to that deer, and it’s sort of been the de facto metric for gauging a child’s articulation.  One started out calling to see the “Duh”, then the “Dee” and then the ‘r’ finally showed up for a mumble-ish “deer”.  Then sentences came along.  Anyhow, that’s not Arden.  😀  Arden is on “Dee” phase…I guess we haven’t spent enough time up North to get into the “Duh” phase, or maybe just hadn’t gone downstairs that often.  All this is set up for the biggest news.  This game room also has an air hockey table.  On a trip down to see the “dee” we started up a game.  I said, “Arden this is called ‘hockey'”.  So, for the next few minutes all I heard was a fairly crisp and precise “Hock Key”.  He’s done this amazing pick-up with a few other words, most recently we had tacos for supper (tonight actually), told him once that his taco was coming and were surprised with, “Tock`  ohhh”.  Quite surprising.

He’s got a crazy memory already too.  He’s been running around lately with an Easter basket, putting well planned things (see next story) in it and proudly showing it off.  The other morning he put a couple books in there, one of which was Good Night Moon.  The bottom of three, if I’m correct in my recollection.  Anyhow, that evening it was wind-down story hour and arijem suggested we finish off the set with Good Night Moon (which, btw we are both strangely attracted to).  At the sound of that mention he jumped off the couch and ran to the kitchen.  I think we both thought he was looking for a snack, this book is usually on his bookshelf in his room.  I think one of us was even starting to correct him when he tossed the top book(s) off the Easter basket, proudly grabbed Good Night Moon and raced back to us.  To say we were shocked and amazed would be a gross understatement.

Update:  Forgot to add this story.
Arden’s been enamored with making groups lately.  He’ll find a whole bunch of stuff that belongs together and make nice neat stacks, piles, rows or concentric arcs.  It’s very interesting to watch, and he’s super dedicated to finishing it once he starts.  It’s really quite a sight.  One day it was his letter train that got set up very very meticulously, the next it’s the books being displayed in our living room windows.  It’s really quite amazing what this creative kid comes up with.
End Update

He’s also crazy.  😀  Not the bad kind (read: the Dad kind), the super-silly, tons of fun kind.  I’ll leave you with what arijem’s been waking up to more often than not the past few days, and what we’ve both been chased around the house with, in a giddy terror. 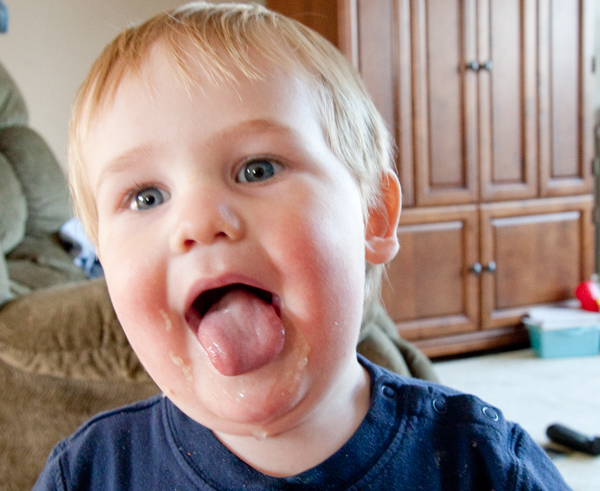